After my 20-year-old son, Charles, killed himself June 5, 2015, I needed to talk but I struggled to find people willing to listen. He had suffered from depression and finally an addiction to heroin in the last few months of his life, which further stigmatized his death. Charles was the last person I ever expected to kill himself. He was engaging, fun, loving and appeared to adore life.

When I did talk about Charles after his suicide, whomever I was speaking with would abruptly change the subject. I would try again and my words would meet a roadblock and the conversation would be forced to take a detour in favor of something more palatable. I wanted, needed to talk about the child I lost.

I had buried him but I didn’t want to bury his memory, too.

Given the sensitivity and emotional pain of the subject, few are willing to talk about suicide, mental illness or the addiction that often triggers this cause of death. Most people think talking about suicide “gives someone the idea.” But a responsible and sensitive conversation that is not sensationalized or doesn’t focus on method, encourages people to reach out for help, which has been proven by several studies.

I was determined to drag this unwilling topic into the spotlight to prevent tragedy and going public was my way of managing my own pain and finding support and healthy ways to heal.

The social media posts my son published prior to his death could have been bullet points under the phrase, “What do people thinking of suicide say?”

To me, this post, which I didn’t see until the day he died, signaled he was headed for the mythical “rock bottom” and he would ask for help from his addiction. However, my definition of rock bottom and his were not the same. Contrary to what people think, those thinking of suicide are not typically determined to die. They want to end their pain; however, they are often ambivalent about dying. Just listening with empathy and without judgment is sometimes all it takes to save a life.

For most, it is about twenty minutes of irrational thought where the pain is so intense people who suffer these thoughts think death is the only option. They think the world would be better off without them. Once the intensity of the feeling subsides, sufferers are often frightened and feel guilty. Contributing factors for these “brain attacks” include mental health, family health history, and environment.

I was terrified of going public. But the voices that were trying to talk me out of it, were drowned out by the ones pushing me forward to share. I didn’t know because I was not educated and missed opportunities to prevent his suicide. By speaking out, maybe others would see the signs prior to a death.

I started by going public with a newspaper article about my family’s tragedy and when it was published, I had to breathe my way out of the panic attack that was threatening to take me hostage. Maybe my friends would not want to be around me anymore, my clients might walk out on me. Maybe my business partner would decide I was too much to deal with. And why would anyone want to hear from a mother whose child had checked out on her? It took me 5 months to write a 1,200-word article that ended up going around the world. It turned out that others were reading their story in mine.

Prior to the article publishing, I started a blog called Emotionally Naked so I could find healing through writing. Soon, I was speaking publicly about our story and for the first few months, I cringed every time I shared my hurt, but pressed forward.

Blog posts I thought no one would ever read were shared hundreds of thousands of times on social media. My tribe grew and together we helped push the cause forward.

While looking at my son’s death certificate, I wondered how he managed to fashion his instrument of death. Then it hit me. He googled it.  People google how to sew on a button, I bet they google ways to die, too.

Instead of writing articles that offered instruction, I wrote ones that offered hope–a place where people suffering could share their pain without having someone trying to fix or dismiss it. These “how-to” posts needed to show up in Google results when people searched for specific ways to die.  For this to happen, my tribe and I had to share the cringe-worthy titles in social media and this helped me get some of the most crucial posts on page one of Google for key phrases people use to research ways to die.

Together, our efforts have saved lives.

And in that process, I learned, healed and found hope again.

The persistence it takes to drag this topic into the spotlight day-after-day is exhausting. I meet with rejection, closed doors, and people who accuse me of being a shameless self-promoter.  Then I meet with a mother who says, “You expressed exactly how I feel. Thank you.” Had I put as much effort into a blog about eyelashes, I’d be ranked number one by now. Heck, a blog about toenail fungus would have been easier to promote.

It has taken a patient, persistent, relentless multimedia approach on multiple platforms by tens of thousands of passionate supporters to achieve the reach we have so far.

Some days I wonder why I put myself through this and then I get a message like the one below. That’s why I do it. Because messages like this never get old. 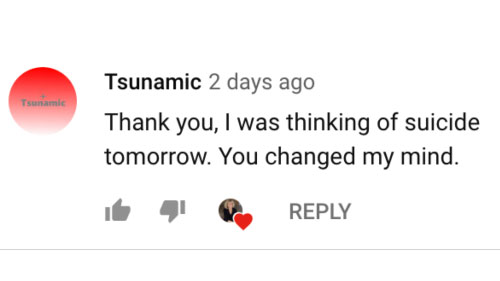 Anne Moss Rogers is an Emotionally Naked® public speaker and author of the book, Diary of a Broken Mind: A Mother’s Story, a Son’s Suicide and the Haunting Lyrics he Left Behind. For more information, visit the blog, Emotionally Naked. Anne Moss’ TEDx, Can a Blog Save Lives?

Look for Anne Moss Rogers on the LTC Podcast Later This Fall!