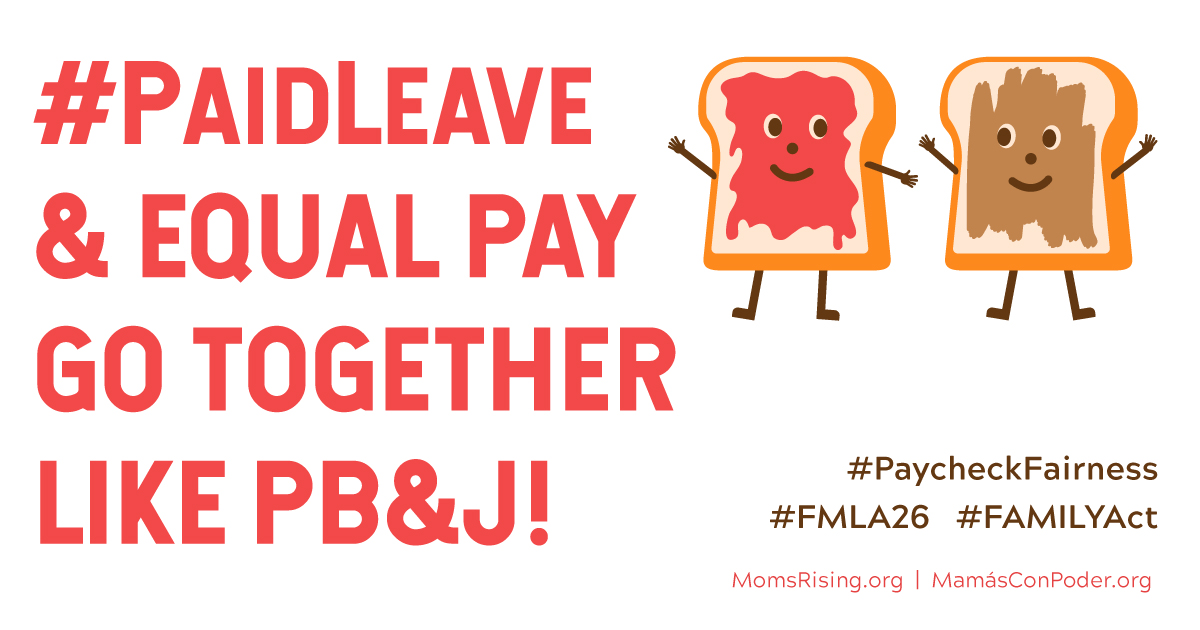 A few weeks ago, I woke up in the middle of the night to the sound of my two-year-old wailing. She was afraid and uncomfortable, having vomited in her bed and woken herself up. She reached for me, her sweet face looking pitiful and streaked with tears. As soon as she was bathed and comforted and sheets were changed, I fired off an email to my boss: “Won’t be in today—sick kid. See you tomorrow.” As I hit send, an ugly, uncharitable thought crept its way into my brain: this is one less day I’ll have at home with the new baby.

Though I hadn’t told anyone yet, I was newly pregnant with our second child. For weeks, since the day I saw that little blue plus sign appear, I had been working and reworking some complicated math problems in my head; ones that are recognizable to too many working families. If I don’t take any vacation days, and if I don’t get sick more than twice, I can probably get to twelve weeks.  What if Isla gets sick? What if there are complications with my pregnancy? How much unpaid time could I take, if I needed to?

I would venture a guess that my family’s financial situation is familiar to many of you. We can always pay our bills on time and put food on the table. We can treat ourselves to the occasional movie or dinner out. Most months, but not all, we put a modest amount in savings. And yet, we take none of this for granted. The loss of a single paycheck would have a real and immediate impact on our lives. Like so many families, taking more than a few days off without pay simply isn’t an option.

The truth is, we are luckier than most. We have two incomes and generous sick leave and vacation packages. My short term disability plan will provide a too-small portion of my salary for a few weeks. We have good credit and could take out a loan. We can get by and make it work, even if it’s hard.

But why, in one of the wealthiest nations in the world, should we settle for simply scraping by? And why, because some of us will be fine, should we turn our backs on those who won’t? Single mothers, low-wage earners, and those caring for ill or aging family members are being left behind at staggering fates.

We are a nation that proclaims to value children and families. And yet, we continue to fail catastrophically at putting our money where our mouth is. Most of us have heard the jarring fact that the U.S. is the only industrialized country with no national paid family leave. It’s alarming to hear; it’s different to live, particularly for those who don’t have the privilege or resources that families like mine do. For enormous numbers of our fellow citizens, lack of paid leave isn’t just an inconvenience. It’s harmful in dire and lasting ways. By refusing to recognize federal paid leave as an urgent need, here’s what we’re really doing.

We are contributing to a public health crisis.

One in four mothers are forced to return to work less than 10 days after giving birth, a statistic that has major implications for maternal and infant health. While the U.S. has the world’s largest economy, we also have among the highest infant and maternal mortality rates in the industrialized world. Black mothers and infants are even worse off, with mortality rates 2.4 and 3 times higher, respectively. It doesn’t have to be this way. According to economist Christopher Ruhm, 10 weeks of paid leave could reduce infant mortality by as much as 10 percent. Additional research links longer maternity leave with lower rates of maternal depression, higher rates of immunizations, and longer periods of breastfeeding.

We are leaving women behind.

Women are largely underrepresented in leadership positions, and are still paid less than their male counterparts. Equal and accessible paid family leave has been proven to increase women’s participation in the workplace and close the pay gap. It also allows women who choose to, to stay in the workplace. When Google increased paid parental leave, the number of new mothers who resigned was cut in half.

We are setting children up to fail.

Parents who are forced to return to work soon after giving birth are also forced to make another gut-wrenching decision—to place their children in inadequate, poorly staffed, and unlicensed childcare facilities. In the first months of life, infants’ brains grow at an astounding pace, and responsive, nurturing caregivers are crucial. Research shows that young children denied stable, positive relationships with caregivers are more likely to experience behavioral problems that can persist into adulthood.

So what can we do about this? We’re on the cusp of a major shift in how we view family leave. Once seen as a women’s issue, 84 percent of Americans now believe that paid family leave matters.

Political leaders from both sides of the aisle have also expressed support for a federal paid leave program in some form. Last week, Senator Kirsten Gillibrand (D-NY) and Representative Rosa DeLauro (D-Connecticut) reintroduced the Family Act, which would provide workers up to 12 weeks of paid leave at 66 percent of their salary. The Family Act would be funded by employee and employer payroll contributions of two cents per $10. In other words, we could fund partially-paid family leave for full-time workers at a cost of only $2 a week. While the act is unlikely to pass in its current form, voicing our support for it is critical. Telling your Senator of member of Congress that paid leave is important to you is one of the simplest, most important actions we can take.

Even without a federal paid leave program, employers have the opportunity to help close the gap. If your workplace is one of the majority that does not offer paid family leave, ask why! Advocacy group PL+US offers free, helpful resources for approaching the conversation with your organization’s HR department or senior leadership. People nationwide are pushing back on outdated workplace policies, and it’s working. In 2018, 20 companies introduced new paid leave policies.

My daughter’s stomach bug was, fortunately, short-lived. Within a couple of days, she was back to her happy, energetic self, playing with her friends at preschool. My husband and I were back at work.

But still, I continue to worry every single day. I worry about our own family—after all, one medical emergency could wipe out our paid sick leave for the year. Mostly, though, I worry about the country as a whole, and the damage we are continuing to inflict by neglecting this moral and economic emergency.

We don’t have to accept too-short, cobbled-together leave, economic anxiety, and compromised health as the status quo. Like all significant policy change, it will be slow and difficult, but the well-being of our children and families is worth it.

Check Out These Resources for Paid Leave From PL+US

Read More about the FAMILY Act

Sign the MomsRising Petition to Support The FAMILY Act

Get A Free Copy of Our Latest Book!

Lose the Cape: Mom's Guide to Becoming More Socially and Politically Engaged (And How to Raise Tiny Activists.)

Join forces with other moms ready to make a difference!