A Day in the Life of Raising a Child with Autism

A Day in the Life with Autism

Disclaimer: This is just one typical day in the life of a person with Autism but just like every person is different, so is Autism. What Autism looks like in my house can look very different in someone else’s.

As a mother of a teenage son who has Autism, I have learned how to have more routine in my life. We humans, in general, love our routines but before my son came along, I was very much a spur-of-the-moment kind of person. To be honest, I still am but when I am with my son, I have to be more aware of sudden changes in his life that could overwhelm him.

I am lucky though because he is able to adapt to small changes. For example, a few weeks ago, it was a really nice day out so I decided to take my kids some where but I didn’t know where so we went for a drive. We drove and drove until I finally decided on a destination. When my son asked me where we were going, I told him I didn’t know. He was okay with that and returned to listening to his headphones – something he has to do because outside noises while driving bother him.

He adapted better to transitioning from elementary school to middle school than I did. I was very nervous. That is a huge change but he managed it very well. Of course he has an awesome support system in place at school with the many dedicated teachers and paraprofessionals that help guide him when he needs it, so I like to give props to them. Now, we are getting ready for high school!

Anyway, a typical day for my son is getting up by 6am Monday through Friday to get ready for school. His bus doesn’t come until 7am but he has to have plenty of time to wake up, eat breakfast, watch his cartoons, get dressed, put his deodorant on, brush his teeth, and take his vitamin. All of these things he does at very specific times. From 6 to 6:30 he watches cartoons and eats his breakfast. At 6:30, and not a minute before, he will get dressed. He absolutely will not brush his teeth until 6:50. Brushing his teeth is his least favorite thing to do so he waits until the last minute to do it.

I name each of these things because of the specific time that he has them down in his calendar he keeps in his head. These are the ways in which his Autism affects his day but it isn’t in a bad way. Some people think this doesn’t leave room for freedom or some such thing like that but for him, having a specific time to do every single thing he has to do helps him stay on track throughout his day.

Wear your support for Autism Awareness Month & support the Autism Society of America – $2 donated from each sheet of wraps sold.

When you think about it, is it really so different from the rest of us? I mean, when I wake up in the morning the first thing I have to do is start my coffee. Then bathroom. Then take the dog out. Then drink my coffee. I don’t have a time stamp on all of these things like my son does but it’s basically the same principle.

When he comes home from school, he puts his book bag down, gets into comfy clothes, grabs his iPod and heads straight for the bathroom for about 20 minutes. Then he has four hours to watch TV, write his stories, and play a video game. At 9pm he heads to bed and he doesn’t deviate from that except on the weekends.

The weekends are different. They’re a little more laid back but when he has plans to go somewhere or a special event is coming up, he reminds me every day of the week. “Mom, remember I’m going to Nana’s this weekend.” Or, “mom, we have this show to go to on Saturday.”

When something unexpected happens, like the time they changed his school bus on him, it can throw him off. He has a hard time with some changes that the rest of us wouldn’t even see and if the situation isn’t handled properly, he can sulk in his room for hours about it. He tends to dwell on sudden changes for several days too but as he is getting older, it is getting easier. So, this is a typical day in my house living with my amazing Autistic son! 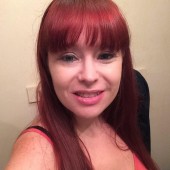 Michelle Kellogg is a blogger and is currently exploring the world of freelance writing. She uses her blog to inspire others who may be dealing with mental illness, have children with special needs, or both. She is a happily single co-parent mom, raising two boys, one with Autism, the other with ADHD. She is a rock music loving, coffee addicted mom, blogging about parenting Music, Fitness, and any other random thoughts that invade her complicated brain. You can visit her blog here: http://www.rockinrandommom.com/

The Dirty Bottle Under the Bed

And yet another copy of #Losethecape #free for you!

The Importance of Bedtime Routine… and other sleep tales!