I am a believer in the Bedtime Routine!

It took us over three years to get my oldest child to sleep through the night. We were nearly certifiable, my husband and I were both so tired. I’ll never forget the last time my son woke up at 2am and padded his way into our room. My husband snapped. He told my son that we were done getting up every night and actually put him in time out for getting out of bed. Yes, a time out at 2am. But it worked. Little man has stayed in his bed (exceptions being if he has a bad dream, but those are rare) since then.

It’s not that he was a bad sleeper. He slept fine. I think a large part of his problem was that we never established a good routine for him. We lived overseas when he was born, and in the first 6 months of his life we made a transatlantic move, visited my Dad in Iowa two times, visited my husband’s parents in NY twice, went to the beach twice, and lived in three different places. There was nothing routine about his life. It was a struggle getting him in the bed, (he probably got out of bed 15 times each night!) lots of tears all around, and the child was never asleep before 9:30pm. This seemed to set us up for failure.

The good thing was that my husband and I realized that we were at fault for his terrible sleep patterns.

So when the second child came along, we tried to ensure we did not repeat any bad habits.

These results are not scientific evidence, certainly. As we all know, each child is different. Second children are different. But I will swear by the bedtime routine because it worked for the second and third children.

With the second and third children, we implemented a strict bedtime with the same exact routine each night. We try not to stray from it, but when traveling or having guests or in special circumstances, we do make allowances.

The routine starts with dinner. We sit down as a family between 6 and 6:30 and eat dinner. At 7:00 the first bath starts. By 8pm, all three children have been bathed and are in jammies. We have a snack, read stories or play a game, brush teeth, say prayers, and say goodnight by 8:30. (We have recently moved that time back to 8pm because they are so tired from school.)

Now the second child is testing her limits, so she’ll pop out of her room a couple of times, but for the most part, bed time is not nearly the nightmare it used to be. The oldest and youngest are sleeping through the night. The middle child gets up and comes into our room almost every night, but we’ve since decided co-sleeping isn’t so bad and it gives us a little extra snuggle time with our middle child.

One. Kids crave routine. They really do. If they have a good routine, they tend to act better. At least mine do.

Two. Consistency is key. To make any major changes or adjustments, there will be a fight. But hold your ground and stay consistent, and sooner, rather than later, the child will comply and your life will be so much easier. If you give in, you will always be giving in.

Read more articles on Kids and Sleeping from some great bloggers: 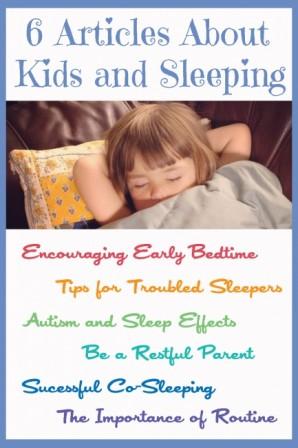