A Reward Chart that Works

Parenting has become its own beast in the 21st Century. Throwing birthday parties not only mean planning how you can entertain the attendees, but what to give them to take home. Sending your child to school often feels like you are sending them to a daycare to ingest large amounts of unnecessary information. A child’s schedule is more complex than learning chemistry. And discipline has opened the way to rewards, because positive reinforcement is better than negative. Gone are the days that you can beat your child into submission, you must figure out how to get your child to do what you want by reinforcing their good behavior before punishing the negative.

Do a simple Google search and return over 4 million results for reward charts. From chore charts to event charts, there really is a chart for everything. I’ve tried a lot of them. By trying, I mean, I printed them out, got all the requisite supplies (stickers or markers) and posted them prominently on a primary wall of the house. After all of my hard work, the charts sat empty for a long time ~ no less than a month, before I decide to take them down.

Granted, I know they work. The few times that I have actually tried to do it, some behavior changed, but it was never exactly what I wanted. The problem with a lot of the charts is that I have to be ready and cognizant any time my child did that EXACT thing. Plus, with the age gap between my eldest and the next (11 and 3), I had to have different charts for different children and then had to remember what each of them did that gave them a reward.

Until I came up with a new reward chart ~ a very simple chart. My children get a star every time they:

What are the rewards? Often they aren’t much. Sometimes, it’s getting a star on their shoulder as well as on the chart. For my toddler, she’s decided that every five stars, she wants a piece of bubble gum. Granted, it’s hard to get her to make it to five stars, but I’m completely willing to fork over a bubble gum or two to get her to calm down. Every 20? They each get a dollar. Only my son is raking in the cash, yet they all seem to be on board.

We’ve successfully kept this chart going for the last two months. We’ve been consistent and haven’t felt pressured to put a sticker on every day, yet they keep on going!

Do reward charts work for you? 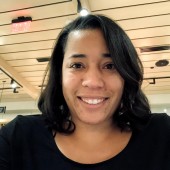 April Grant is a wife and mother to three beautiful children here on earth (and one in heaven). She has a passion for women to live their best life, in whatever they do. I look forward to connecting with you on a personal level. Feel free to reach out and say hi!

What To Do When You And Your Baby Are Sick

The Terrible, No Good, Rotten First Day of Kindergarten

This site uses Akismet to reduce spam. Learn how your comment data is processed.